It is the glory of God to conceal a matter, but the honor of kings to search it out. Proverbs 25:2

I dreamt I was at a relative’s house, at a family reunion. I was 18 years old in the dream. I went into the house and 2 boys about 6 years old came in and asked who I was. I told them I was a cousin of theirs. Then they fed me from a bowl of sweetened white puffed rice and loaded my hands full of them overflowing. I worked thru some memory and was telling the boys how I was related, saying their mom was my Aunt Katherine, so I nick named her Aunt K.

Then Aunt K came thru the door and there were then, some animals in the back yard which was a farm field with trees. There were also some dogs, big red Golden Retrievers and Irish Setters, and some small horses just a bit bigger that were fiery red in color running with the dogs and then a young girl cousin ran out to run with the horses. She had long fiery red hair and was the age of 12. On the back of one of the red horses was stamped the word Jericho. EOD

Interpretation - My being 18 years old is 2018. The 2 boys represent 2 more years or periods of small bullishness, with sweet puffed white rice economy, then Aunt K comes, representing economic bearishness. After Aunt K, there were then, the red horses and a Jericho (the nuclear holocaust TV series) type event the 12 year old cousin was running towards.

In the group of animals running with each other was a golden retriever, indicative of the price of gold, to retrieve some gold. There was also an Irish setter, indicative of a time of Ire (anger and wrath), set. The girl in the dream was running after catching the Jericho (Jericho TV series of Nuclear holocaust) horse, indicative of where we are headed, to the ww3 prophecies. 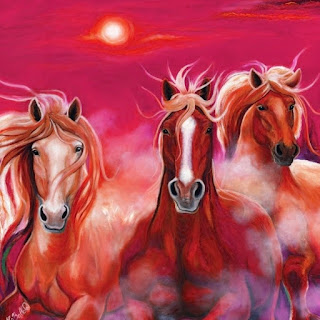 Red, as in the red hair of the girl and the red horses is indicative of a bad economy and bad times, in the red; the red ahead.

May 2020 edit - The price of gold will be going higher as the .gov keeps printing money (golden retriever). The times are becoming IRE, indicative of the Irish setters. Ire mean wrath or anger and there's a lot of anger over covid shutdowns and the election. This time of ire set, will be revolutionary; 2 years of white puffed rice economy 2018 and 2019, then the trouble began, 2020, foretold and fulfilled!

November 2020 edit - There have been articles out, about a “K shaped recovery” (Aunt K), where one part of the economy goes back up and the other goes down. So far, the stock market is going up, while the real economy on main street has been hurting, which paints a clear picture of an “Aunt K” shaped economy, in need of much stimulus. The famed quote, V shaped recovery is not accurate. The K shape is much more in line with the current state of the economy.

There are a few other notable signs in the dream. There was an emphasis on the age of the boys and red haired girl from the dream. The boys seemed around 6 years old with the girl being 12 years of age, indicating a time line. The 12 year old red head will be 18 years old in 6 years from 2018. 18 is the legal age of adulthood in the US, indicative of a time of fullness reached, in 2024.

A 3rd synchronicity to this WW3 in 6 years (from 2018) is the word Jericho stamped on the back on one of the red horses. In the Bible, the Israelites marched around Jericho 6 days and on the 7th day, they marched 7 times around the city, and then it fell. America is Jericho, and in 6 years, could signify its final year and then the 7th year, it falls, which with the age of the girl and 2 small boys in the dream, makes a triple synchronicity to watch for 2024/2025 for WW3.

This dream has metaphorically matched to a tee, from 2018 into the 2020 crash foretold. There’s no reason we shouldn’t be on watch for the rest of this dream to fulfill.

Oh God, awaken your people to see what is to come and prepare! In Christ, Weather